President Obama Can and Will Win 2012 Presidential Election 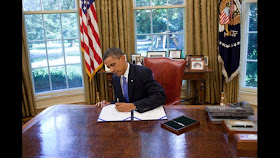 President Obama can win the 2012 Presidential election if African and Hispanic Americans unite and form a voting bloc that is committed to his re-election.


Although I don’t share the network’s political viewpoints, I watch the Fox News channel. I tune in to be knowledgeable of the conservative political agenda. One of the shows that I watched was “The Glenn Beck Show.” According to Beck, African-Americans were denied the right to vote because many Whites feared that our votes would change the political landscape of this nation.

On November 4, 2008, Beck’s theory about the power of the African-American vote became a reality. A coalition of voters of all races, including African and Hispanic Americans changed the political landscape of America. History was made when the United States of America elected Barack Obama as its first African-American president.

In a December 23, 2008, article TheDefendersOnline, stated in part: “that Obama owes his victory both to a substantial increase in the number of minority voters, and their overwhelming support of his candidacy. A look at the racial breakdown of Obama’s winning coalition yields some interesting food for thought:

The 2012 presidential election will present this nation’s voters with a choice of electing a Republican president and Republicans congressional members. By voting for Republicans Americans will also be choosing the Republicans’ political vision that appears to favor corporate America and the very wealthy.

The 2012 presidential election will give Americans the opportunity to re-elect President Obama and his agenda that includes providing quality education opportunities, signing a comprehensive immigration reform bill, passing The Dream Act, providing equality, and justice for all of America’s citizens. His historic appointments of a Hispanic-American, Associate Justice Sonia Sotomayor, and Associate Justice Elena Kagan to the United States Supreme Court; delivering on his promise to repel the military’s Don’t Ask Don’t Tell policy; and providing affordable health care for millions of Americans who did not have health care insurance are examples of him make this a more just and perfect nation.

President Obama will win again if African and Hispanic Americans show support of his candidacy by registering to vote, getting state identification cards made if they don’t have a driver’s license (many states require state issued IDs), volunteering to work at their local polling place, signing up on the Organizing for America website, making phone calls, donating money in any amount to the Democratic Party, blogging, posting positive responses to election coverage online, attending campaign events sponsored by the Democratic Party, going to the polls in record numbers, and voting as a bloc for him and democratic congressional candidates on November 6, 2012. The political landscape will be changed again when President Obama is reelected and the Democrats regain a democratic majority in the House of Representatives and gain a larger majority in the Senate.