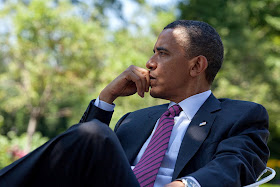 Is Bill Clinton Secretly Campaigning for Hillary to Challenge Pres Obama in 2012?

On May 25, 2011, Bill Clinton told Republican Paul Ryan ““I hope Democrats don’t use this as an excuse to do nothing.” Clinton was referring to the Republicans demand that Democrats needs accept Ryan’s plan to end Medicare as we know it. I am a President Obama supporter and I don’t trust Bill Clinton motives and recent actions.


Bill and Hillary Clinton refusal to end her hopeless quest to secure the 2008 Democratic Presidential nomination has caused President Obama great hardship in governing. Now Bill has once again given Pres Obama opponents especially Ryan a tool to use against him during the debt ceiling debate and more importantly during the 2012 presidential election.

NOTE TO BILL AND HILLARY CLINTON, TAVIS SMILEY AND OTHERS THAT MAY HAVE A DESIRE FOR HILLARY TO CHALLENGE PRES OBAMA IN 2012: Your words, actions, and deeds will not go unchallenged this time. Additionally, Hillary can’t win in 2012 because African-Americans will not support her in a general election.