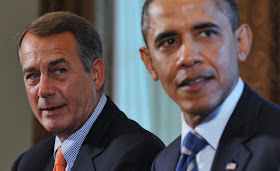 John Boehner’s refusal to cooperate with President Obama and his American Job Act is an example of hypocrisy and/or lying. John Boehner lied during his November 2, 2010, midterm election speech when he said: “"The people’s priorities will be our priorities. The people’s agenda will be our agenda. This is our Pledge to America; this is our pledge to you.”

According to a September 8-11, 2011, Gallup poll: Sixty-seven percent of American rank jobs and the economy as the most important problem facing America. Only twelve percent listed the federal budget deficit as the most important problem. Yet Boehner and his party are still placing their will and goal (making President Obama a one term president) over the welfare of this nation and the world.

When will Speaker Boehner honor his pledge to America? How many jobs have been created since John Boehner became Speaker of the House of Representatives?

Boehner needs to change course the federal budget deficit is not the most important issue facing this nation. The American People want and needs jobs. Speaker Boehner should pass the American Job Act bill with deliberate speed.

Click to find your congressional representatives and contact him or her and post an I-Report on CNN.com and tell him "to pass The American Job Act Bill."